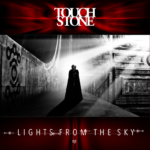 Lights From The Sky

After a year of turmoil that saw the departure of both their lead vocalist and keyboardist/founding member, Touchstone have returned with a four song EP that is both a continuation of the Touchstone sound and an exciting look to the future.

With the trio of Adam, Moo and Henry handling the instrumental part of the songwriting, the sound of Lights is heavier than previous albums, featuring Ad’s Van Halen influenced guitar work over the walloping rhythm section of Moo and Henry. Stage & studio veteran keyboardist Liam Holmes adds just the right amount of texture along with a few key synth and piano lines of his own.

The real ace of the proceeding is polish-born vocalist Aggie Figurska, who answered the group’s advert for a singer after Kim Seviour’s departure. Replacing a prominent lead vocalist and frontperson for an established group is no easy task, but Aggie steps into the role (including lyric writing) with an aplomb that is nothing short of breathtaking. Her range, power, and theatrical delivery give the band an assured and confident focal point throughout the album.

On a personal note, I’ve long been an admirer and fan of Touchstone and count them among my dearest friends and couldn’t be happier that they decided to carry on and did so in such a terrific fashion. Lights From The Sky is sound of a band returning from a situation that would have ended most groups – Not by knocking politely on the door, but kicking it down and telling the world WE’RE BAAACK!