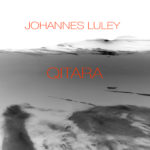 QITARA starts off with a distinctive china cymbal crash, reminiscent of the opening of Birds of Fire – a bold move to be sure, to reference some of the most adventurous and technically advanced music ever composed (and improvised) right off the bat, but it also serves to put the listeners into a frame of reference for the journey they’re about to take.

And what a journey it is! Playing the album prior to perusing the liner notes (which are fantastic BTW, more on that later) I kept hearing references to many of the great guitar stylists I grew up on – Jeff Beck, Pat Metheny, John McLaughlin, Steve Howe- like we might have gone to high school together and traded albums back & forth.

QITARA is far from a tribute album however. Rather Johaness weaves his influences in & out of the various styles effortlessly and with a compositional flair that places the influences of his musical past into new and different areas. Very much like someone who speaks multiple languages naturally by immersing oneself in different cultures. In contrast to the gentle acoustic sounds of his previous solo work Tales From Sheepfather’s Grove (reviewed here https://goo.gl/VehdQz), QITARA is a rollicking and rocking full-band affair that features stunning contributions from some truly ace musicians (with credits such Stanley Clarke, Jon Anderson, Josef Zawinul, these folks are the cream of the crop) in addition to the fantastic guitar work.

About the aforementioned liner notes, they are spectacular in their detail and a terrific read. From the story of his first experience with a Fender Stratocaster to the track by track notes, fans of guitar and guitar recording will really appreciate reading the concepts behind the compositions and how the various sounds were crafted.

From the opening bell to the soaring final bars, QITARA is not only a lovingly crafted nod to the musicians who influenced Johannes throughout his career, but by adding his own unique talents and abilities he has created a masterwork of his own. This is a must-have, and be sure to also check out Johannes’ excellent band Perfect Beings, whose latest album is due for release January 2018 with a performance at Rosfest in May.