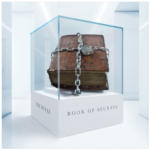 Declan Burke, guitarist/vocalist of Darwin’s Radio, Frost*, and Audioplastik, has just released his third solo album Book of Secrets, and what a terrific outing it is.

With Declan’s formidable skills on guitar and voice accompanied by Kristoffer Gildenlow, Carl Westholm, and Steve Hughes (bass, keyboards, and drums respectively), Book of Secrets is obviously going to be full of outstanding musicianship, but what sets the album apart is the strong writing and an abundance of melody and harmony.

While there are definitely no weak moments, there are a couple of real standout tracks. One of my favorites is “Everlasting”, with its bombastic chorus, is a gorgeous slice of arena-rocking prog and one that currently gets multiple repeats on the USAProgmusic Victrola.

“Another Hope” opens with a stirring soundbite of current US president Barack Obama admonishing us that ‘we can disagree without being disagreeable’, which is certainly something we can all aspire to. A mid-tempo ballad with Carl Westholm’s keyboards underscoring Dec’s almost angelic tenor, the song expresses equal amounts of optimism and caution before the sound of ocean waves wash it all away and into the ‘ebb and flow’ of the lovely piano & guitar of “Intervals”.

While brimming with positivity, an underlying theme of Book of Secrets is that one should be mindful of the fact that under the surface things are not always as they appear. Nowhere is that more clear than on “Hate & Lies” – are we ‘past the point where we can be redeemed?’ Is this ‘the turning point in mankind’s history?’. I wouldn’t call it despair so much as a call to wake up before the damage cause by hate & lies can no longer be undone.

In short, Declan can shred on the guitar like nobody’s business and his vocal prowess have made him a highly sought after collaborator, but this album isn’t at all about showing off. Book of Secrets is not only a mature work that showcases Declan’s gift for highly melodic songwriting and arranging, it’s a truly exhilarating listen and highly recommended.